This easy cinnamon rolls recipe with pumpkin is perfect for autumn and winter season. The addition of pumpkin makes the cinnamon rolls super juicy. With the creamy cinnamon butter mixture they simply taste heavenly. The Pumpkin Cinnamon rolls are also fluffy because they are made with yeast. In this blog post you will find a basic recipe for vegan cinnamon rolls that you can also use without pumpkin.

I can’t stop baking with apple-cinnamon or pumpkin or making meals with pumpkin. That’s why I will upload an apple cinnamon and pumpkin recipe series for October :-). If you cook or bake the recipes, I would be very happy about your feedback! If you can’t wait, there are already delicious pumpkin and apple cinnamon recipes on my blog. Recently I baked fluffy apple cinnamon muffins. Additionally, I made an delicious apple pie and a simple apple crumble recipe on my blog. Or are you more interested in autumnal pumpkin recipes? Then you absolutely have to try these cinnamon rolls. More recipes with the Hokkaido and Butternut Pumpkin:

The cinnamon rolls consist of the dough and a cinnamon butter mixture. Additionally I made a vegan cream cheese frosting and that is just the perfect combination. Frosting makes the cinnamon rolls even sweeter and juicier, but it is not a must! You can find the Frosting recipe on my carrot cake with frosting recipe. You can adjust the amount of ingredients and use a little less. Also the cinnamon butter filling makes the rolls juicy and so tasty. The Pumpkin Spice flavor is perfect for autumn season.

Ingredients for the dough

Ingredients for the dough

How to make Cinnamon Rolls with Pumpkin

Warm oat milk in a pot at low heat. The oat milk should only be lukewarm. Take the pot from the stove and add the yeast to the milk, sugar and butter. Stir the mixture until everything is dissolved. Put flour into a mixing bowl with salt and Pumpkin Spice. Add the yeast mixture as well as the pumpkin puree and knead the dough well, preferably with your hands. This can take a few minutes. The dough should be nice and elastic. However, the pumpkin puree makes the dough a little more moist. This is quite normal! Let the dough rise for at least 1 hour.

In the meantime you can start making the filling. To do this, melt the butter in a pot or microwave. Add sugar, cinnamon and pumpkin spice. Mix everything together to a creamy mixture. Do you want to add nuts? Then add the chopped walnuts to the mixture.

Roll out the dough on a floured surface. As this dough is a bit more moist, it is best to shape it with your hands. Then brush the dough with the butter cinnamon mixture. Now there are two strategies: Roll out the complete dough and cut the dough into slices. But it worked better to first cut the dough into stripes and then roll up the single stripes. Leave the cinnamon rolls to rise in the casserole dish before you bake them in the oven.

I would be very happy to get feedback from you! If you try these cinnamon rolls with pumpkin, please leave me a comment with a ⭐️ rating. Are you active on Instagram? If you post a picture of this recipe, please link it to me with @plantiful.heart so I can see your creation! ? 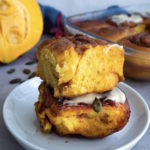 For the Yeast Dough:

For the Yeast Dough:

Are you active on Pinterest? and do you like this recipe? Then you can pin the following picture ? You can find the Pinterest Button under the picture.

My name is Melanie and I have a passion for healthy plant-based food. I enjoy trying out new recipes. I want to show you that it’s not that difficult to lead a healthy lifestyle.

It doesn’t have to be complicated dishes, it can work quite simple. The main thing is that we take good care of ourselves because after all we only have this one life.